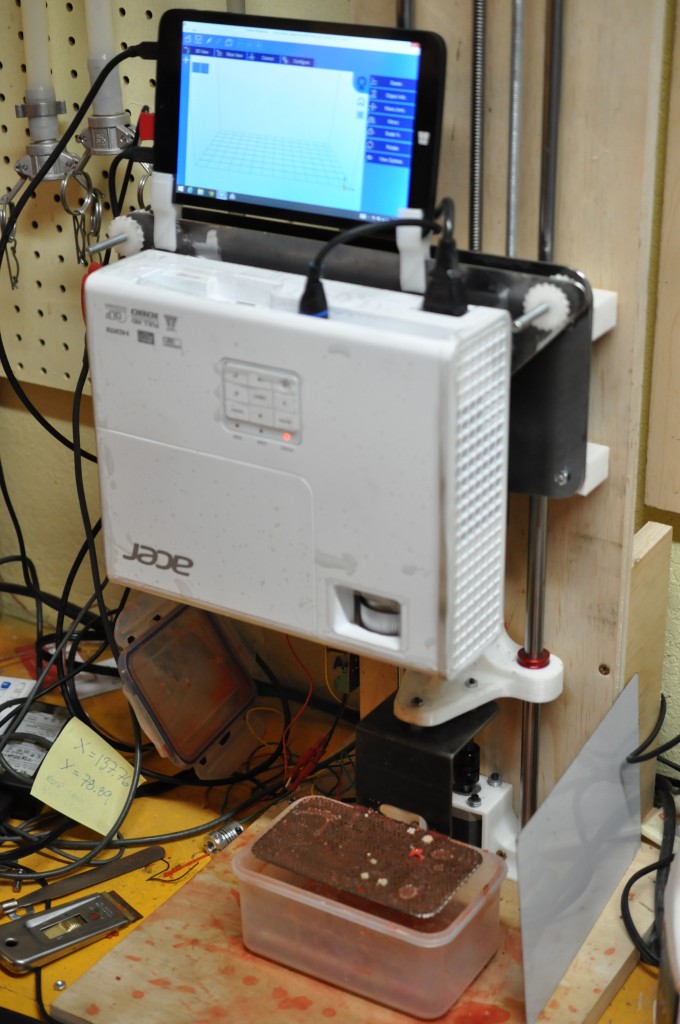 These innovations made me yearn to tinker with SLA printing, so I set out to build my own SLA printer using primarily 3d printed parts and parts left over from previous printer builds.

A top down SLA printer is ridiculously simple to make.  In its simplest form it consists of nothing more than a video projector and a z axis.  All the magic is done by the video projector, and you just buy that part.  If you buy the right one (I use an Acer H6510BD) you don’t need to modify the projector at all so it still works to watch movies.  The software is the other part of the package.  Creation Workshop provides a very simple easy to use solution.  The package is free to use for individuals, but they license it to printer manufacturers, and make custom versions for different machines.  The software is rather basic, sort of the RepG of the SLA world, but it works well enough and can be easily customized to run almost any configuration of SLA printer you can come up with.

In its simplest form the printer projects a slice then lowers the z axis and projects the next image.  Unlike bottom up printers, top down machines require no peeling, so they don’t require special vat coatings or tilt mechanisms.  The part is simply lowered into the vat in preparation for the next layer.  Creation Workshop allows you to inject G-code at almost any time in the printing sequence which makes it easy to activate any sort of peeling mechanism or re-coating blade depending on your machine’s design.